“We all can do that!  Learn from us! Follow our good practices and manage your Participatory Budget!”

For those who have visited Tskhaltubo at least once, it is impossible not to fall in love with this beautiful town, which is known for the abundance of healing waters.

In the twentieth century, when Tskhaltubo developed increasingly, the scientists began scientific and hydrological research, although, healing water did not come from all new wells.

Decades have passed since then.

And, lo and behold, a few years ago residents of April 9 Street noticed that the purest water flowed from one of the dormant wells. Soon, the locals discovered the unique properties of this water. The purest water source was cure-all for gastric ulcer… and people queued at the water spring. “This water is the best drink for hangover!” – tells us Zura Kakhidze, smiling, who lives on the April 9 Street.

… So, at the initiative of Zura Kakhidze and with the active engagement of the local residents, the neighborhood decided to make a special well-equipped gazebo at the healing water spring. Implementation of this idea became realistic thanks to the “Participatory Budget”, which was recently presented at an information meeting at this very source.

“At the first stage, the Organization held information meetings with the City Hall and the citizens, they shared their experience. Afterwards, they financed an information campaign targeted for the citizens. I have been involved in this process from the very first day. “It must be said that engagement  in the “Participatory Budget”, as well as in the trainings initiated and organized by the Solidarity Fund PL in Georgia, the knowledge gained had a great influence on Elene’s career growth. The young, energetic student soon became a civil servant, coordinator of the “Participatory Budget” and an employee of the mayor’s office. 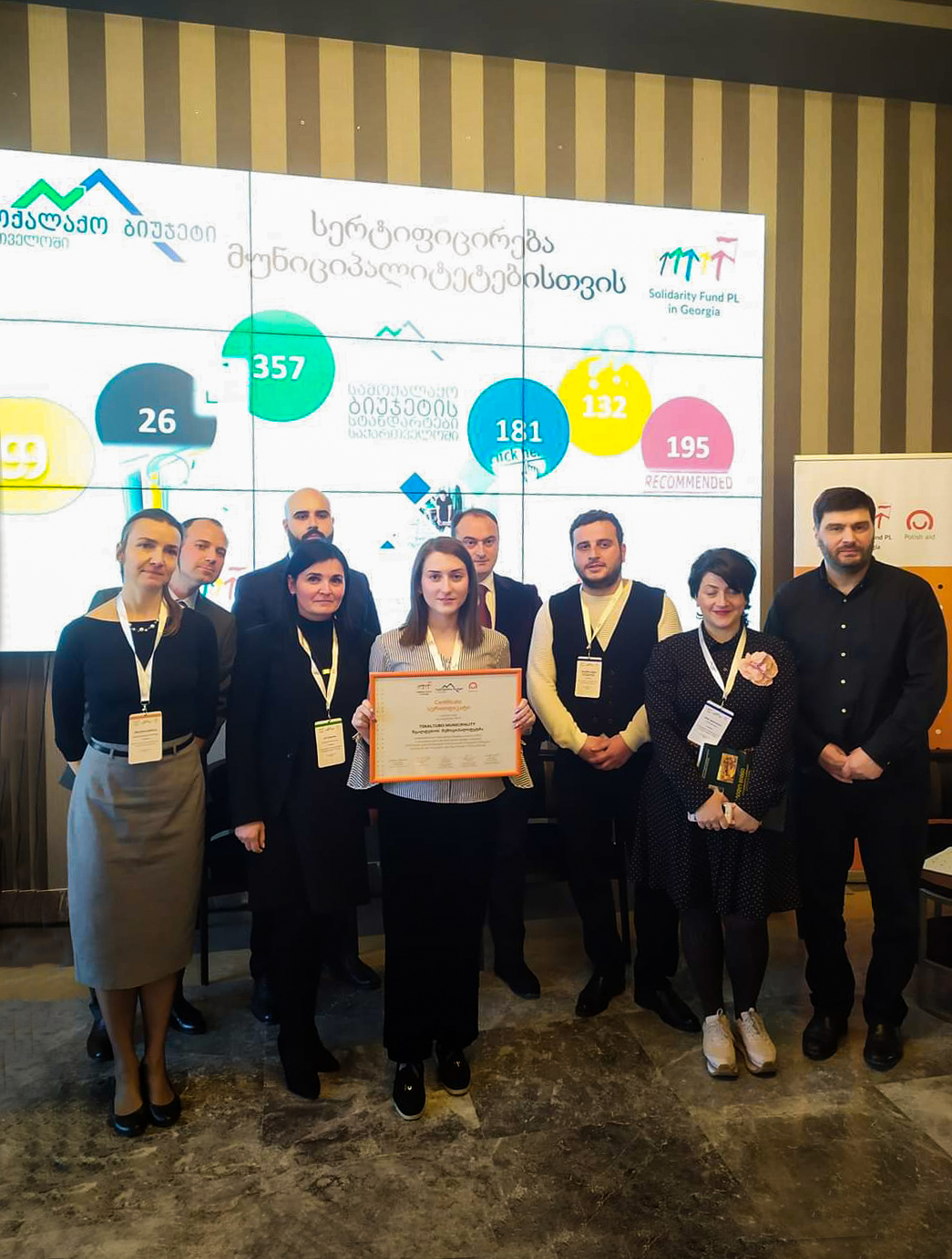 Elene Kravtsova in the center

“Participatory Budget” is part of the municipal budget, which is managed by the citizens. They develop projects, and the population decides whether the submitted project will receive funding or not. What is the mechanism for making decisions by the population? – we ask Elene Kravtsova. “Voting as on elections,” explains Elene. The project which gets the most of votes will be funded. Most importantly, the process is transparent. Here it is important to ask for an amount om money that does not exceed the budget. 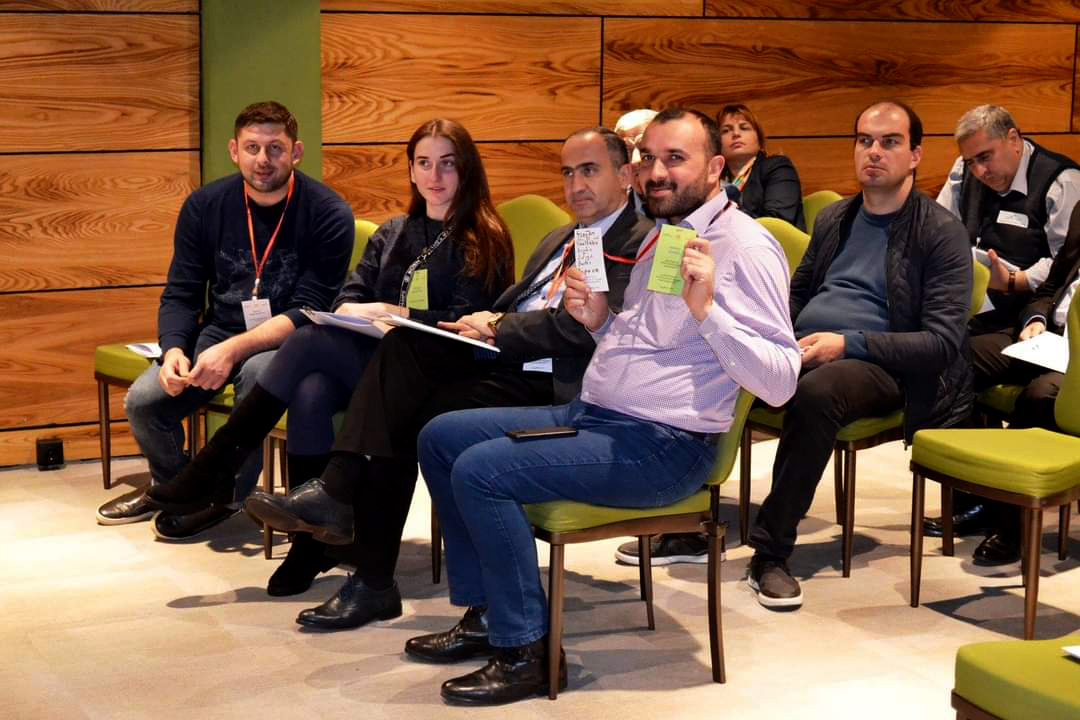 Funding for projects is carried out by voting, it is a transparent process.

“Many people come here from different villages and towns, and they have to queue in the rain or the sun. – So, we arranged a gazebo, – says Zura. Zurab Kakhidze is already thinking about developing the project. “It would be nice to arrange a park here or just put benches, so that a person does not stand while filling the container with water”.

This is a playground, which was also funded within the “Participatory Budget”.

“Look, there are three buildings in front of you and there are many children, but  there is nothing entertaining here,” – Ana Tkeshelashvili shows us the yard with a hand gesture.

“Some time ago, an information meeting was held on our street on the topic “Participatory Budget”. It was quite interesting. We, the parents, got together and decided to make a project of a small playground. You  can see, that  the swing is installed, as well as a slide. The sand was delivered here where children can play, and also  –  the benches. The outdoor lighting was installed so that people could walk in the evening and parents could control their children. In such a situation, when schools and kindergartens do not work, this playground is our salvation … Children play outside in the open air ” – Anna continues to talk and watches the children playing on the playground. Construction of another park and playground in the city center will begin in 2-3 months. This project was supposed to be implemented in 2020, but unfortunately due to a pandemic it was delayed.

About 70 children live around, the elderly will be able to relax in the park, it will be equipped with special constructions of treadmill for active lifestyle lovers. Project manager Luiza Chankotadze says that formerly this place was a playground built of metal constructions. Over time, this construction became outdated, and it all ended up with the fact that one of the children was hit in the head by a piece of metal swing. Concerned citizens dismantled the attractions by their own.

This is how the area designated for the arrangement of a park looks like.

According to Elene Kravtsova, first of all, drainage channels, rubber paths will be made, new attractions, benches will be arranged, outdoor lighting will be installed.

The arrangement of the park and the children’s playground will be completed in the summer of 2021.

By 2021, the “Participatory Budget” will be replenished with 150 000 GEL from the budget of Tskhaltubo to implement the initiatives of the local population.

“Now I am sharing my experience with other municipalities as an expert of the Solidarity Fund PL in Georgia.

“I am deeply convinced that only active and responsible citizens can ensure sustainable development of the country,” – says Elene.

Project co-financed within the framework of the Polish development cooperation of the Ministry of Foreign Affairs of the Republic of Poland.